Kickapoo Title 25; Section 109 requires that before beginning their duties as a Kickapoo Tribal Police Officer, each officer must make the following oath:

A copy of this oath is signed by each officer and kept in their personnel file.

We, the members of the Kickapoo Tribal Police Department, are committed to excellence and are dedicated to the people, traditions and diversity of the Kickapoo Tribe in Kansas. We strive to serve the community with the highest quality service and to maintain a parthership with all of our citizens.

We will be an organization devoted to improvement, excellence, the maintenance of Tribal satisfaction, and the principles of quality leadership.

Patrolman Jared Bammes was born and raised in the Manhattan Area.  Jared was always involved in wrestling, starting at a very young age.  He coached Middle School and High School wrestling for almost 11 years.

In 2003 Nathan was deployed to Iraq in support of Operation Iraqi Freedom. While in Iraq he served as a member of a personal security team. As a member of this team Nathan’s duty was to protect the lives of high ranking military and other government officials.  On Nov 8th 2004 Nathan and two of his teammates placed their vehicle in between and attacking Vehicle filled with explosives and the convoy they were protecting. The attacking vehicle struck their truck and exploded, killing two of Nathan’s members and leaving him wounded. This action saved the lives of four others.  Nathan received the Bronze Star with Valor device, Purple Heart, Combat Action Badge and other military medals.

Once Nathan returned back the states and healed from his wounds he joined the Horton KS Police Department as a patrol officer in 2005, in 2007 Nathan then left the Horton PD to take a job as a Patrol Officer with the Kickapoo Tribal Police Dept.  In late 2008 Nathan’s wife job moved them to AZ where he took a break from working in Law Enforcement and worked towards his Criminal Justice Degree. In January 2016 Nathan returned to the Kickapoo Tribal Police Dept as a Patrol Officer. He was promoted to Patrol Sergeant in May 2016 and Chief of Police in September 2017.

Michael Reynolds began his Law Enforcement Career as a Corrections Officer for the Jefferson County Kansas Sheriff's Department in 2009, In 2014 he attended the Part Time Basic academy at The Kansas Law Enforcement Training Center and assumed Part Time Patrol Duties for the City of Oskaloosa Kansas. In December of 2014 he began working part time for the Valley Falls Police Department as well. He was offered a full time position with the Valley Falls Police Department in Late 2015 and Attended the Full Time Academy as Part of Basic Training Class 238 graduating in 2016. He then began working for the Kickapoo Tribal Police department part time in April of 2016 switching to full time on June 22 2016. 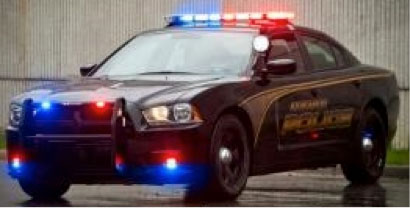